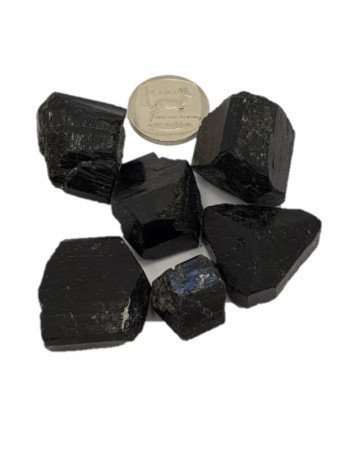 Tourmaline is a crystalline boron silicate mineral compounded with elements such as aluminium, iron, magnesium, sodium, lithium, or potassium. Tourmaline is classified as a semi-precious stone or crystal. The gemstone comes in a wide variety of colours with black being the most common.

Description of these Tourmaline Natural Crystals

This is a black variety although a few crystals have white speckles on some sides which is a common feature of tourmaline.
Tourmaline is the only mineral to form crystals with 3-sided pyramid terminations and these 3-sided terminations are present in some of the crystals.

XS:  (less than 4mm)
S:    (4-15mm)
M:  (15-25mm)
L:    (25-50mm)
XL:  (greater than 50mm)
Where items are approximately spherical the size refers to their diameter. Where items are long and thin (such as crystal or blade shapes) or any other shape, then the size refers to their largest dimension. It is important to see the pictures to know exactly what the appearance is. Our pictures do not showcase the best, they are as realistic as possible and include A R1 coin to demonstrate the actual size.

We supply units of 6 crystals. The picture gives a very good indiction of their appearance. They have predominantly flat sides, some have clear termination points while others have more of a stone shape.
A few crystals have fine white speckles on some sides which is a common feature of tourmaline.
Size varies with the crystals we supply being Medium (15-25mm) to Large (25-50mm). The average total mass of 6 crystals that we supply is 143g.