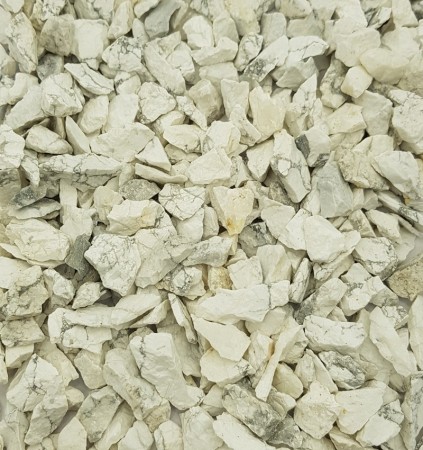 Howlite White is a beautiful milky white stone that looks like marble but it is harder and more porous than marble.
These are beautiful natural white stones that have not been tumbled or polished. Some stones contain gentle grey markings.
Howlite was named after Henry How, who discovered it in 1868 in Nova Scotia. Henry How was a Canadian chemist, geologist and mineralogist who was told of this previously unknown mineral by gypsum quarry miners who found it hampered their mining because it is harder than gypsum. Howlite is a borate mineral that forms as irregular nodules which can appear in the shape of a cauliflower head. Howlite has the appearance of white marble or porcelain with a sub-vitreous luster. Transparent howlite crystals are extremely rare.
Howlite, a calcium borosilicate hydroxide (Ca2B5SiO9(OH)5), is a borate mineral found in evaporite deposits
Size Descriptions for all Bastion Paint Crystals and Stones
XS:  (less than 4mm)
S:    (4-15mm)
M:  (15-25mm)
L:   (25-50mm)
XL:  (greater than 50mm)
Where items are approximately spherical the size refers to their diameter. Where items are long and thin (such as crystal or blade shapes) or any other shape, then the size refers to their largest dimension. It is important to see the pictures to know exactly what the appearance is. Our pictures do not showcase the best, they are as realistic as possible and include a R1 coin to demonstrate the actual size.
Howlite White Rough Stones: Size S:
The colour is a beautiful uniform milky white with size ranging vary from 8-15mm.
Keep out of reach of children
All our products should be kept out of reach of children under 5 years and anybody who may tend to place items or liquids in their mouths should be supervised. Even packing can become a choking hazard.