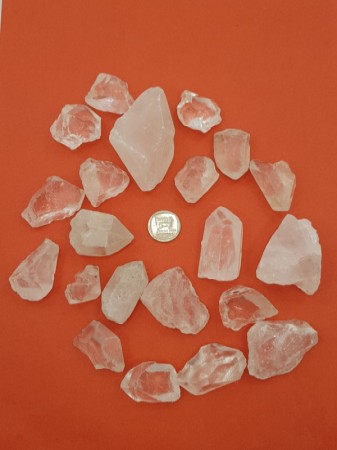 Quartz is a mineral that readily forms crystals and stones of many colours. Perfectly clear quartz is the purest crystal form (coloured quartz crystals and stones acquire their colour from inclusions and impurities of other minerals).
Quartz is a silica mineral composed of silicon and oxygen atoms in a continuous framework of SiO4 silicon–oxygen tetrahedra with each oxygen being shared between two tetrahedra, giving an overall chemical formula of SiO2.
Quartz crystallises with a trigonal crystal structure. Its ideal structure has a six-sided prism at each end (or at one end if the other end is attached to a substrate).

Description of these Quartz Crystal Chunks

These are chunks of clear and milky quartz crystals. Some have crystal like features such as flat sides and pyramid terminations but overall their shape is more random and we thus refer to them as chunks.
The picture gives a good representation of what you will receive.

XS:  (less than 4mm)
S:    (4-15mm)
M:  (15-25mm)
L:    (25-50mm)
XL:  (greater than 50mm)
Where items are approximately spherical the size refers to their diameter. Where items are long and thin (such as crystal or blade shapes) or any other shape, then the size refers to their largest dimension. It is important to see the pictures to know exactly what the appearance is. Our pictures do not showcase the best, they are as realistic as possible and include a R1 coin to demonstrate the actual size.
Clear to Milky Crystal Chunks: 500g
Each pack that we sell contains a variety of shapes and sizes. The size generally ranges from 25mm to 50mm (Size L) but some larger crystal chunks up to 70mm may be included. In the picture the R1 coin is next to a typical 500g unit. A typical 500g unit will have about 21 chunks but remember we supply these by mass and don't count them.
Keep out of reach of children
All our products should be kept out of reach of children under 5 years and anybody who may tend to place items or liquids in their mouths should be supervised. Even packing can become a choking hazard.