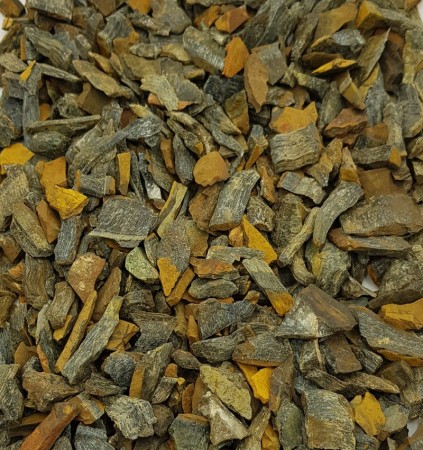 Blue Tiger's Eye is generally called Hawk's Eye
These are natural stones that have not been tumbled or polished.
Tiger's eye (also called tiger eye) is a chatoyant gemstone best known to have a golden to red-brown colour and a silky lustre. Subtle chemical difference result in the formation of a blue coloured version.
In Tiger's Eye formation, quartz crystallises over a fibrous material that is usually crocidolite, a form of asbestos. This fibrous crocidolite is blue in colour but is gradually replaced by quartz and the alignment of the replacement quartz gives the characteristic chatoyant effect. Tiger's eye is formed by parallel intergrowth of quartz crystals as the quartz crystals replace the crocidolite fibres.
When the crystalline quartz contains less iron and when a significant amount of the crocidolite fibres have not been replaced then the stone can have a blue colour due to the blue colour of crocidolite. Blue Tigers Eye is thus partly quartz and partly crocidolite.
These stones include bluish-grey patches or lines as well as significant yellowish sections. They do not have as much silky lustre as may be expected from tiger's eye but are very interesting, especially if one appreciates the process of formation.
Size Descriptions for all Bastion Paint Crystals and Stones
XS:  (less than 4mm)
S:    (4-15mm)
M:  (15-25mm)
L:    (25-50mm)
XL:  (greater than 50mm)
Where items are approximately spherical the size refers to their diameter. Where items are long and thin (such as crystal or blade shapes) or any other shape, then the size refers to their largest dimension. It is important to see the pictures to know exactly what the appearance is. Our pictures do not showcase the best, they are as realistic as possible and include a R1 coin to demonstrate the actual size.
Keep out of reach of children
All our products should be kept out of reach of children under 5 years and anybody who may tend to place items or liquids in their mouths should be supervised. Even packing can become a choking hazard.